SGLT2 Inhibitors are new drugs used in the treatment of Diabetes Mellitus. These drugs are increasingly being used because of their beneficial effects on the heart and kidneys. However, the Side effects of SGLT2 inhibitors are not uncommon.

Side effects of SGLT 2 inhibitors are one of the major causes of treatment discontinuation.

These drugs bind to and inhibit the sodium-glucose co-transporter 2 channels present in the kidneys. SGLT2 channels normally absorb the filtered glucose back into the blood.

Inhibition of SGLT2 channels causes the filtered glucose to be excreted in the urine. Hence, most of the side effects of SGLT2 inhibitors are related to the urogenital tract.

Infections are the most commonly reported side effects of SGLT2 Inhibitors:

Infections are the most commonly reported side effects of SGLT2Inhibitors. Most infections reported in clinical trials were either urinary tract-related or genital infections.

SGLT2 Inhibitors use was linked to an increase of vulvovaginal candidiasis by approximately two to fourfolds, which was seen in between 10 and 15 percent of women [Ref].

The rate of urinary tract infection increases with SGLT2 inhibitors (8.8 percent vs 6.1%) [Ref].

Additionally, reports have been received by the US Food and Drug Administration of potentially fatal conditions:

In clinical trials, it was observed that the incidence of bladder cancer was greater in patients who were on SGLT2 inhibitors.

There were 10 bladder cancer cases diagnosed in clinical trials. Interestingly, five of these cases occurred within the first six months after dapagliflozin was introduced.

This is a shorter time period than one would expect if dapagliflozin encouraged tumorigenesis.

These findings have led the FDA to recommend surveillance studies post-marketing [Ref]. Long-term safety data are not available regarding the effects of chronic glucosuria on the bladder.

Hypotension is a common side effect of SGLT inhibitors:

SGLT2 inhibitors can cause intravascular volume contraction and osmotic diuresis. With glucose and sodium, excess water is also lost.

Acute kidney injury has been reported with the use of SGLT2 inhibitors:

Postmarketing reports have shown that some patients who developed acute kidney injury and underwent dialysis were being treated with SGLT2 Inhibitors.

One-half of the 101 cases of possible SGLT2 inhibitors-associated acute renal injury reported to the FDA occurred within one month. Most patients recovered after discontinuing the drug.

A few patients may have suffered from acute kidney injury due to being volume-depleted, hypotensive, or taking other medications that could cause kidney damage. It is not clear if any of these patients had preexisting chronic renal disease.

A subsequent analysis of SGLT2 inhibitors non-users and users in two different cohorts showed that the risk of acute renal injury was not higher with SGLT2 inhibition use [Ref].

In trials that evaluated cardiovascular morbidity in type 2 diabetic patients and established CVD, SGLT2 inhibitors showed a protective effect on the kidneys.

However, it is important to assess renal function before initiating SGLT2 inhibitions. This should also be monitored throughout treatment.

Patients with comorbidities such as heart disease, hypovolemia, or other medications that can cause acute renal injury should not use them.

When the estimated glomerular filter rate (eGFR), is between 45 and 60 mL/min, dosage adjustments and frequent monitoring are necessary.

Broken bones – a side effect particularly associated with Canagliflozin:

The risk of fractures is greater in patients using SGLT2 Inhibitors. Broken Bones have been primarily linked to the use of Canagliflozin (Invokana).

According to a study [Ref], fracture rates were higher in patients who took Canagliflozin (Invokana).

One example is that there were 1.5 and 1.4 bone fractures for 100 patient-years of canagliflozin 300 mg and 100 mg exposure, respectively, as compared to 1.1 and 1.1 in the active or placebo group [Ref]. As early as 12 weeks after the first dose, low trauma fractures were reported.

Orthostatic hypotension, which results in postural dizziness, falls, and fractures in older patients after 12 weeks of therapy is a possible mechanism. SGLT2 inhibitors can also negatively affect bone density.

In a 2-year placebo-controlled trial of Canagliflozin, bone density was measured in 716 older people.

According to putative mechanisms, fractures are more common in patients who take Canagliflozin. However, it has been reported that other SGLT2 inhibitors may increase bone mass and decrease bone fractures.

The risk of fracture was not raised by empagliflozin and dapagliflozin in a meta-analysis of safety outcomes.

Side effects of SGLT2 Inhibitors – The risk of Euglycemic Diabetic ketoacidosis:

This included more than 350,000 patients. Among the cohort of patients treated, 500 DKA events occurred.

Patients in the Canagliflozin (Invokana) group were the most at-risk of all three SGLT2 inhibitors (HR 3.58 compared to 1.86 and 2.52 for empagliflozin and dapagliflozin, respectively).

Euglycemic Diabetic ketoacidosis was more commonly reported with the use of SGLT2 Inhibitors. Euglycemic Ketoacidosis was defined as patients having plasma glucose levels below 250 mg/dL [Ref].

It is important to look for Euglycemic ketoacidosis if the patients develop nausea, vomiting, or malaise.

These patients should have serum ketones monitored. SGLT2 inhibitions should be stopped if acidosis has been confirmed.

In placebo-controlled trials of type 1 diabetes, the risk of SGLT2 inhibitions in relation to DKA was consistently demonstrated.

These studies showed an increased risk of DKA even though participants who were at high risk for DKA were not included at baseline.

However, substantial efforts were made to reduce this risk. It is discouraged to use off-label type 1 diabetes medication [Ref].

In two randomized trials that evaluated canagliflozin against placebo in patients with type-2 diabetes and established CVD (or at higher CVD risk), there was an approximately 2-fold increase in lower limb amputations in patients who took canagliflozin.

Patients who had suffered from prior amputations, peripheral vascular disease, and neuropathy were most at risk.

A pharmacovigilance survey of more than eight million case safety reports revealed that 79 lower-limb amputations due to the use of SGLT2 inhibitors have been reported since 2013.

The risk of toe amputations was significantly higher with empagliflozin and canagliflozin (PRRs 8.91 and 6.86 respectively).

A posthoc analysis of empagliflozin’s cardiovascular trial showed that there was no higher risk of lower limb amputation.

Similar results were found in the renal outcomes trial. The study was terminated prematurely due to benefits.

In light of previous canagliflozin studies, the protocol was modified to include a risk mitigation strategy.

A foot exam was done at each study visit. If there were any risk factors for amputation, the study medication was stopped.

Patients at high risk of foot amputation should not receive SGLT2 inhibitors. This includes:

Foot ulceration should be checked in patients taking SGLT2 inhibits.

Commonly implicated SGLT2 inhibitors with these side effects are mentioned in the table below in descending order: 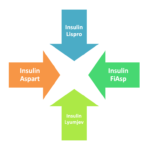