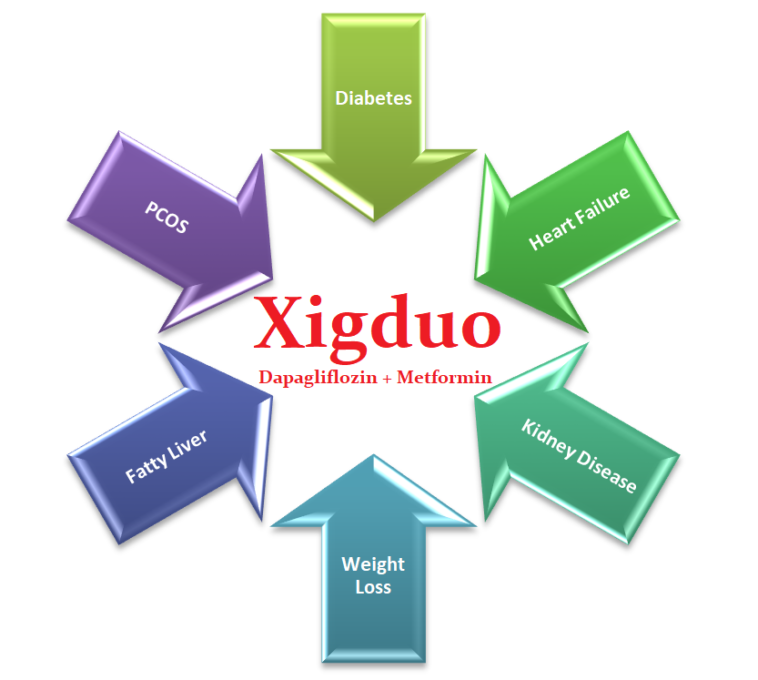 Metformin Side effects, Contraindications, and Concerns

Before discussing Xigduo’s uses and efficacy in patients with diabetes and heart diseases, a brief overview of how the two drugs work is mentioned here:

Dapagliflozin Side effects, Warnings, and Contraindications

It is important to note that the combination pill Xigduo is not indicated for the treatment of patients with Diabetes Mellitus Type 1.

Dapagliflozin monotherapy, Farxiga, has been approved by the EMA for the treatment of Diabetes mellitus type 1 in certain situations.

These may include obese children with a BMI of 27 kg/m² or more, low risk of Diabetic ketoacidosis, and patients requiring high doses of insulin.

The primary indication of Xigduo (dapagliflozin and metformin) is T2DM. However, it is also used to lower the chance of heart failure in adults with type 2 diabetes mellitus, and those who have already been diagnosed with cardiovascular disease (CVD), or multiple cardiovascular risk factors.

Other off-label Xigduo uses include:

How Xigduo (dapagliflozin and metformin) works?

Dapagliflozin is from the class of medicines called SGLT2 inhibitors. It has a novel mechanism of action.

It inhibits SGLT2 receptors present in the proximal nephron of the kidney and blocks glucose reabsorption, causing glucose excretion via urine. Because SGLT2 inhibitors are independent of insulin action, there is less risk for hypoglycemia.

Furthermore, they may be used at any stage in the progression of the disease. In addition, it causes loss of glucose and salt from the body, it also induces weight loss and has blood-pressure-lowering effects.

Metformin is a time-tested medicine from the class of drugs called, biguanides. It suppresses liver glucose production by inhibiting gluconeogenesis. It also improves insulin sensitivity and inhibits glucose absorption from the GI tract.

How effective is Xigduo in the treatment of T2DM?

Xigduo treatment is usually initiated in a dose of 5 mg/1000 mg. The dose can be titrated to the maximum dose of 10 mg/2000 mg if required.

The efficacy of Xigduo treatment has been studied in different clinical trials. A 24 weeks study was carried out in patients who had uncontrolled diabetes with metformin.

Significant reductions in the A1C was demonstrated, as mentioned below (P<0.0001):

The mean weight loss that occurred in the dapagliflozin group was 2.9 kgs for 5 mg and 3 kgs for 10 mg vs 0.9 kgs in the placebo group.

Steglatro Vs Jardiance (Ertugliflozin Vs Empagliflozin)

The 7 Important Side Effects of SGLT2 Inhibitors

Xigduo uses and indications primarily include T2DM. However, it has been proven to induce weight loss and diuresis.

Because of these effects, Xigduo is also used in the treatment of patients with heart failure, NASH, fatty liver, and Polycystic ovarian syndrome.

Read: Can You Take Jardiance and Metformin Together? 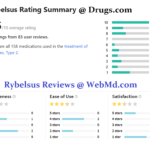