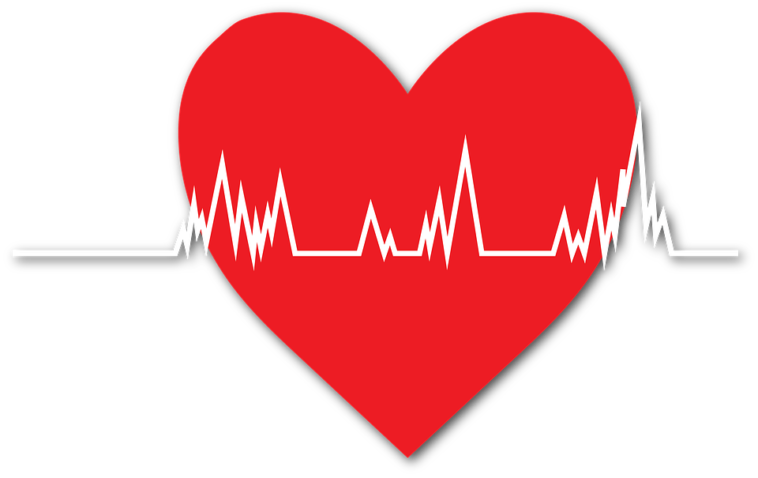 Obesity is linked to numerous diseases. These include diabetes, hypertension, asthma, PCOS, heart diseases, and stroke. However, obesity and heart diseases require special attention as it directly affects the lifespan of the person. Furthermore, it multiplies the risks of comorbid conditions.

The rate of fatty food consumption and an unhealthy lifestyle is getting higher day by day. This sort of behavior promotes fat deposition in the body which leads to unintentional weight gain and is one of the biggest concerns. People’s lives have become more sedentary than they used to be which leads to the inevitable obesity. 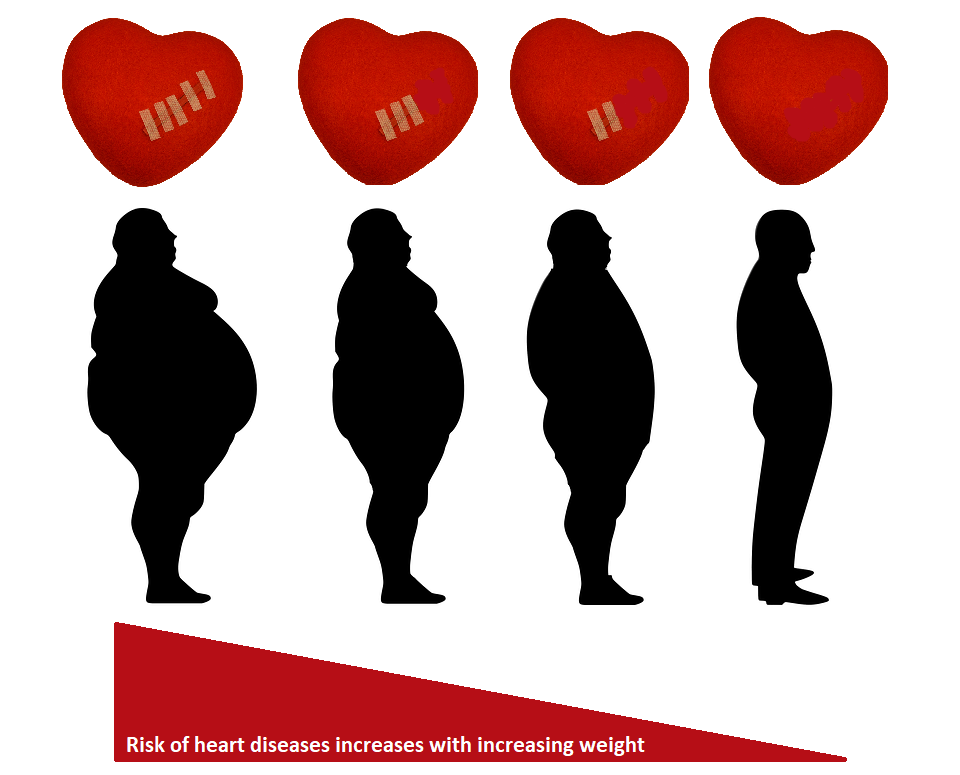 It is a complicated disorder that involves the deposition of an abnormal amount of fat in the body. It is a leading cause of death in developed countries. It can be caused by excessive intake of food coupled with little to no physical activity.

While the frequency of eating can affect weight gain, a diet that contains too many carbohydrates can induce fat deposition too. On another note, genetics can be a primary cause of obesity as well. People with one or two obese or overweight parents can be at the highest risk of obesity due to their inherited genes. Medications like steroids are able to invoke weight gain.

Genetic Obesity: No Matter How Hard You Try, You Have a Setpoint

Obesity is a global issue and is associated with a number of comorbidities, including cardiovascular diseases, diabetes mellitus, insulin resistance, etc.

Class 3 obesity is also labeled morbid obesity. Some people label people with a BMI of 50 or more as superobese. With increasing rates of obesity, the term super-obesity is now being increasingly used.

What Are Heart Diseases?

Heart disease is a term used to refer to a group of disorders or pathologic conditions regarding your heart. Such conditions include arrhythmias, coronary artery disease including heart failure and myocardial infarction, and blood vessel diseases, especially atherosclerosis and hypertension.

Even though there are many other diseases that are associated with obesity, heart diseases are probably the most prominent. Obesity can contribute to this deadly disorder because of arterial and vascular enlargement as well as atherosclerosis.

Another way that obesity contributes to heart diseases is by worsening its risk factors like sleep apnea, metabolic diseases like dyslipidemia, type 2 diabetes, hypertension, and thromboembolic disorders.

A study was done in 2011 with the objectives of assessing the links between high body mass index, high blood pressure, and cardiovascular diseases in Mississippi and other states of America. This study found that there was an increased rate of obesity over the past 5 years in all states of America with Mississippi having the highest rate of obesity and high blood pressure, followed by Louisiana. [Ref].

Another research was done on obesity and its effects on heart diseases. It aimed to explore the effects of exposure to a maternal and post-weaning diet that was obesogenic upon the cardiac structure and functioning of offspring using rat models. This study concluded that obesity-induced by maternal diet and offspring obesity both cause cardiac dysfunction as well as hypertension. These findings showed that the perinatal time period is equally effective in predicting the risks of CVD as is adult-onset obesity. [Ref]

Therefore, health care professionals can take preventive measures to reduce the risk of CVD after evaluating its risk at an early stage in an obese individual’s offspring.

A rise in class III obesity has been seen in recent years. Obesity has a direct connection with the risk factors of hyperlipidemia, hypertension, and diabetes. There is enough evidence that suggests that this disease is linked with structural and functional dysfunctions in the heart.

Such dysfunctions include left atrial enlargement, left ventricular hypertrophy, and impairments of left ventricular diastolic and systolic functions which can lead to other unconcealed forms of heart failure. Obesity is also considered an inflammatory process. It causes myocardial fibrosis and conduction defects and results in an impairment of diastolic dysfunction.

There is a greater concentric left ventricular remodeling leading to diastolic dysfunction and HFpEF (heart failure with preserved ejection fraction). The risk of HFpEF increases with increasing obesity. It was found in one study that the risk of HfpEF increases by 38% and 56% in overweight and class 1 obesity regardless of other cardiovascular risk factors. [Ref]

Obesity and Heart Diseases: How does obesity affect the heart?

Also called A-fib, refers to episodes of irregular and sometimes excessively rapid heart rhythm. This condition can cause blood clots in the heart, eventually leading to heart failure, stroke, etc. A primary trigger of A-fib is being overweight. So, obesity can cause atrial fibrillation easily.

A study has shown that obesity can potentially increase the risk for atrial fibrillation as there is a complex pathologic relationship between both conditions. A cheap and efficient solution to this problem appears to be a comprehensive plan for the management of risk factors. [Ref] 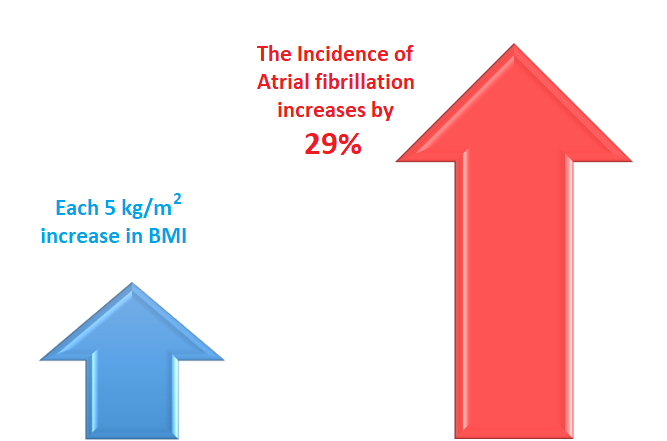 A very deadly disorder that occurs when insufficient blood is being pumped by the heart to meet the demands of the body. This can occur because of the heart being exceptionally weak or not being filled with sufficient blood. Nevertheless, it does not necessarily mean that the heart has stopped.

A study published in 2016 that included over 13,000 participants has found that obesity can single-handedly put an individual at an increased risk for heart failure. The association between obesity and heart failure was more prominent than that with other CVD. [Ref]

For every 1 kg/m² increase in the BMI above the normal ranges, the risk of heart failure increases by 5% [Ref]. However, some data also support the beneficial effects of mild obesity in patients with heart failure. This obesity paradox is not clear.

Obese people as defined by a higher BMI and waist circumference, have high BNP (Brain Natriuretic Peptide) levels compared to normal-weight individuals including those with heart failure. Likewise, it has also been seen that individuals with severe obesity who undergo bariatric surgery, have higher levels of BNP and improved LVDD (left ventricular diastolic dysfunction) [Ref].

It is also presumed that a higher lean muscle mass and extra adipose tissues preserve against cardiac cachexia and sarcopenia.

Being the most prominent cause of death in the world, this brings about the unexpected demise of a patient.

Obesity at a younger age can predict the occurrence of cardiac death in adulthood. Each 5 unit increase in BMI increases the chances of sudden cardiac death by 16% [Ref].

Obesity including mild obesity has been shown to increase the chances of ventricular tachycardia, ventricular fibrillation, and late electric potentials. The risk of arrhythmias resulting in sudden cardiac death could be due to prolonged QT interval, left ventricular hypertrophy, premature ventricular complexes, and autonomic dysfunction.

Severe obesity has also been associated with higher mortality rates after cardiac arrest during the hospital due to ventricular fibrillation or non-VF.

Blood vessels that are responsible for the provision of oxygenated blood to the heart are arteries and in the case of coronary artery disease, there is a slow deposition of plaque in such arteries which can eventually cause myocardial infarction by blocking the heart.

How does Obesity Cause Heart Diseases?

Hypertension can lead to myocardial infarction. Another alarming condition associated with obesity is diabetes, diabetic obese patients are at an even greater risk of heart.

Obesity causes fat deposition in the epicardium and myocardium, apart from its atherosclerotic effects. This results in defective cardiac conduction and ischemia. It also causes left ventricular diastolic dysfunction and progresses to heart failure with preserved ejection fraction (HFpEF).

Can You be Obese or Overweight and Healthy at the Same Time?

How To Prevent Obesity and Heart Diseases?

Lifestyle modifications are the first step to a healthy diet. Weight loss can show a significant reduction in the risks for heart diseases. The intake of a low-fat diet along with proper exercise and increased physical activity can help with weight reduction.

It is very clear that individuals with higher fitness levels have a good prognosis. A high fitness level can be achieved by performing regular aerobic exercise and eating a healthy diet.

The latest of these medications with proven cardiovascular efficacies and are now also been studied in non-diabetic patients with heart failure include:

Apart from medications, bariatric surgical procedures have also demonstrated efficacy in obese patients with a history of heart failure [Ref]. Class 3 obesity is considered a relative contraindication to heart transplantation.

Rybelsus & Ozempic for Weight Loss and Side effects Reviews 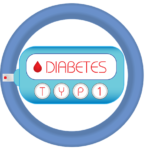