Wegovy, Rybelsus, and Ozempic are three different formulations of Semaglutide.

Semaglutide is a GLP-1 analog that acts like endogenous incretin. Incretins are hormones derived from the acronym “INtestinal SeCRETion of INsulin”.

Incretins are hormones that are released when the body senses a glucose load. The two most commonly endogenous incretins are GLP-1 and GIP (Glucagon-like peptide and Gastric inhibitory peptide).

What is Wegovy? Is Semaglutide approved for weight loss?

Wegovy is a high-dose injectable Semaglutide. It is administered as a 2.4 mg injection once weekly.

It got recent FDA approval for the treatment of obesity and overweight in patients who have at least one weight-related condition such as diabetes, high cholesterol levels, or hypertension [Ref].

Wegovy got FDA approval for obesity and weight management after four large randomized clinical trials confirmed its safety and efficacy.

STEP-1 Trial was a randomized placebo-controlled trial. Once-weekly Semaglutide at a dose of 2.4 mg was studied in 1961 obese adults who did not have diabetes. Individuals had a BMI of 30 Kg/m² or more or 27 kg/m² or more and at least one weight-related condition.

After 68 weeks of treatment, Wegovy was administered subcutaneously in a dose of 2.4 mg once weekly resulting in a weight loss of 14.9% compared to 2.4% only in the placebo group.

Step-2 Trial was a double-blinded placebo-controlled phase 3 clinical trial. It was studied in obese or overweight individuals who had type 2 Diabetes.

Semaglutide was administered subcutaneously in a dose of 1 mg and 2.4 mg once weekly. Patients were enrolled if they had a BMI of 27 Kg/m² or more and glycated hemoglobin of 7 to 10%.

After 68 weeks, Semaglutide administered in a dose of 2.4 mg once weekly resulted in a weight loss of 9.6% compared to 3.4% with a placebo.

In this trial, once-weekly Semaglutide administered subcutaneously in a dose of 2.4 mg was compared to a placebo in a randomized double-blinded clinical study as an adjunct to intensive behavioral therapy and a low-calorie diet.

After 68 weeks of the treatment period, a mean change in body weight of 16% was observed in the treatment group compared to 5.7% in the placebo group.

5%, 10%, and 15% weight loss was observed with Semaglutide treatment in 86.6%, 75.3%, and 55.8% respectively. Gastrointestinal side effects were commonly observed in the Semaglutide group [Ref].

In this trial, the question of whether continued treatment with 2.4 mg Semaglutide once weekly in obese non-diabetic patients can result in the maintenance of weight loss achieved with initial therapy was answered.

This was a double-blinded randomized clinical trial. Patients were administered Semaglutide for 20 weeks.

The initial 16-week dose-escalation period was followed by a 4-weeks maintenance period. Patients were then randomized to receive either a placebo or 2.4 mg of Semaglutide for 48 weeks (plus lifestyle intervention).

Here is a summary of Data from the four Trials:

Summary of the four STEP Trials:

Side effects of Wegovy:

The most common side effects of Wegovy are related to the gastrointestinal tract. Patients may report any of the following side effects while using Semaglutide:

Wegovy has not been studied in patients with a history of pancreatitis. It is contraindicated in patients who are allergic to the drug and those with a personal or a family history of medullary thyroid cancers or MEN II (multiple endocrine neoplasias).

Rybelsus is the oral formulation of Semaglutide used to treat diabetes. It is administered orally at a dose of 3, 7, or 14 mg daily.

It is usually administered with other antidiabetic medicines including insulin and as an adjunct to diet and exercise.

Ozempic is the injectable formulation of Semaglutide. It is administered as a weekly subcutaneous injection.

It is available in 0.5 mg and 1 mg injections. It is indicated for the treatment of diabetes as an adjunct to diet and exercise.

Wegovy has been FDA-approved for weight loss in Obese and overweight individuals with or without diabetes.

Wegovy (and the other formulations of Semagltutde, namely Rybelsus and Ozempic) is considered a “Game Changer” in the treatment of Diabesity.

Wegovy has the advantage of once-weekly administration compared to Victoza (Liraglutide). Treatment with Wegovy can result in significant weight loss compared to placebo medicines. 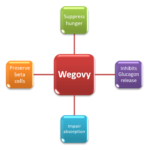