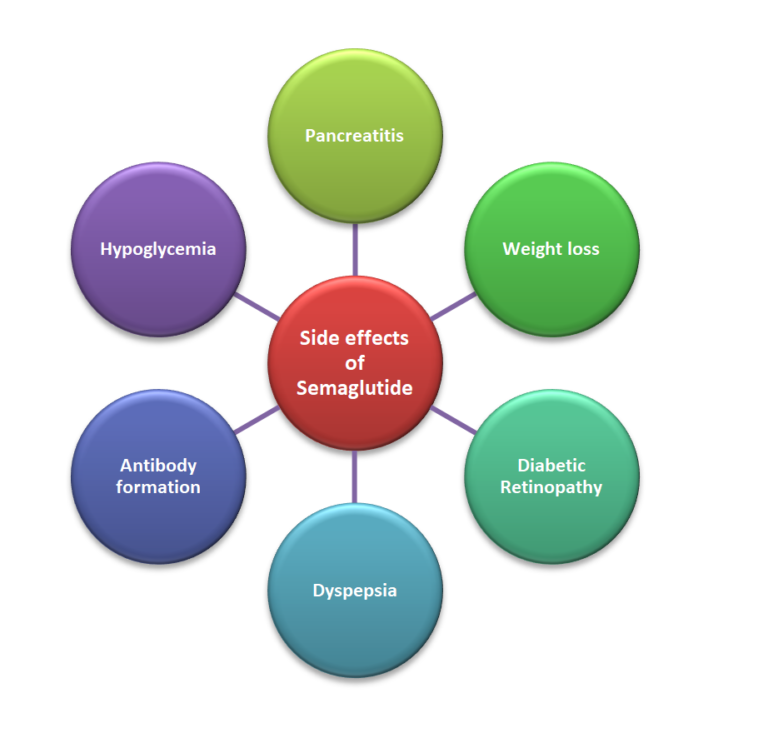 Semaglutide side effects are more or less the same as those of metformin. Patients who are discontinuing metformin therapy due to gastrointestinal side effects may not easily tolerate Semaglutide or any other GLP-1 agonist as well.

It is also important to keep in mind the different formulations and strengths of the drug as the incidence of side effects may be higher in the Semaglutide high-dose formulations.

Formulation and strengths of Semaglutide available:

Who should not be prescribed Semaglutide?

Before discussing the important side effects of Semaglutide, contraindications to its use must be known. The following groups of patients should not be prescribed Semaglutide:

All individuals who are allergic to Semaglutide. Patients with an allergy or a hypersensitivity reaction may develop a rash, body itching, wheels and hives, shortness of breath, wheezing, facial and lip swelling, and hypotension.

All individuals who have had a severe allergic reaction in the past must avoid using it again.

Patients with a personal history or a family history of medullary thyroid carcinoma. MTC is calcitonin-secreting cancer that accounts for less than 5% of all Thyroid Cancers.

All patients who are initiated on Semaglutide treatment should be asked to report to their doctor if they develop any of these symptoms:

Semaglutide should also be avoided in breastfeeding mothers and pregnancy. It has not been studied in pregnant individuals.

Metformin and insulin are the preferred treatments for gestational diabetes.

Semaglutide should be avoided in hospitalized patients admitted with Diabetic ketoacidosis and patients undergoing a major surgical procedure.

These patients should be kept on insulin during the hospital stay and frequent monitoring of their blood glucose is important.

Individuals with Diabetes mellitus type 1 should not be prescribed Semaglutide. Type 1 Diabetes patients are only treated with insulin.

The most common side effects of oral and injection Semaglutide (Rybelsus, Ozempic, and Wegovy) are related to the gastrointestinal tract.

Since Semaglutide inhibits the motility of the stomach and delays gastric emptying, it causes the following gastrointestinal side effects:

Other abdominal side effects that are commonly reported include:

For mild symptoms, it is advised not to discontinue the treatment. If the patient is on oral Rybelsus, advise the patient to take it between one of the major meals such as dinner or lunch.

Semaglutide may cause dizziness, lethargy, dehydration, and kidney disease. In under-weight individuals, it may cause further weight loss that could contribute to weakness and lethargy.

It has also been reported to increase heart rate. The clinical significance of this is not known, however, patients who are at risk of cardiac arrhythmias should use it with caution.

Some of the serious side effects of Semaglutide include:

There have been cases of both acute and chronic pancreatitis. Patients with a history of pancreatitis may be at increased risk of developing pancreatitis from Semaglutide. Consider alternative treatment options.

Patients who consume alcohol are at an increased risk of developing acute pancreatitis. All patients must be asked to report to their doctor if they develop the following symptoms:

All GLP-1 analogs including Semaglutide can increase the risk of gallstones and biliary diseases.

Patients who have rapid weight loss as a result of the drug might be at a greater risk of developing gallstones.

In Patients who are treated with Semaglutide, a worsening in the symptoms of diabetic eye disease has been noted.

The exact mechanism of this increased incidence of diabetic retinopathy is not known, however, one possibility is the rapid change in blood glucose could be causing it.

Most cases were reported in patients suffering from nausea, vomiting, and diarrhea.

All patients should be asked to report if they have excessive fatigue, reduced volume or frequency of urination, or periorbital puffiness.

Renal functions should be checked before treatment initiation and at regular intervals as required.

Furthermore, patients must also be advised to take plenty of water and avoid dehydration.

Semaglutide has been linked to severe hypersensitivity reactions. These include anaphylactic reactions as well as angioedema.

Patients with anaphylaxis and angioedema to GLP-1 receptor agonists should be cautious. There is a possibility of cross-sensitivity among other GLP-1 analogs like Liraglutide, Dulaglutide, Exanetide, and Albiglutide.

All patients must be asked to report to their doctor if they develop itching, hives, rashes, hypotension, facial and lips swelling, difficulty breathing, and wheezing.

Patients must also discontinue the treatment and can take an over-the-counter antihistamine such as chlorpheniramine or Benadryl.

The dose of sulfonylureas and insulin should be reduced when starting the treatment.

All patients should be warned of the risk of hypoglycemia and immediately check their blood glucose or take some sugar tablets or anything that is sweet including cookies, juices, etc. if they have the following symptoms:

Patients who consume alcohol or perform strenuous activity are at an increased risk of hypoglycemia.

Patients should be informed about the possible risks and symptoms including neck mass, dysphagia, or persistent hoarseness before taking the drug.

Patients with a history of MTC or patients with multiple endocrine syndrome type 2 (MEN2) should not use Semaglutide. MTC has been reported in patients who have received liraglutide, a GLP-1 receptor antagonist.

Patients with elevated calcitonin levels or thyroid nodules that were detected in imaging studies or physical exams should consult an endocrinologist.

Patients treated with Semaglutide should be monitored regularly for serum calcitonin, and thyroid ultrasound monitoring can be used to detect MTC early.

Some people have reported suicidal behavior when taking weight-management medications.

Patients with a history of suicide attempts or active suicidal thoughts should not use this medication.

Like all the other GLP-1 analogs, Semaglutide can cause pancreatitis, abdominal symptoms, and kidney injury. It should be avoided in patients with medullary thyroid carcinoma.