Liraglutide mechanism of action for weight loss (obesity) and diabetes is detailed here. It belongs to the class of medicine called GLP-1 analog and is available under the brand names Saxenda and Victoza.

It is available as an injection for daily administration into the skin. The two main indications of the use of liraglutide are obesity and diabetes.

Liraglutide is a long-acting analog of GLP-1 (Glucagon-like peptide). Other GLP-1 analogs include:

There are two incretins of clinical importance in the body, namely:

Tirzepatide (Mounjaro) is a newly approved diabetes and obesity drug that has dual GLP/ GIP effects.

“Incretins” word has been derived from INtestinal seCRETion of INSulin. These are gut hormones that are secreted by the enteroendocrine cells of the gastrointestinal tract when a food stimulus is sensed by the body.

Incretins were discovered when scientists found out that insulin secretion in response to a glucose load administered intravenously is less compared to when the same amount of glucose is administered orally.

Liraglutide Mechanism of Action in Diabetes:

Liraglutide is a long-acting analog of GLP-1. It is used in patients with diabetes because of the following main mechanisms:

Liraglutide activates the Beta-cells of the pancreas to release insulin in response to elevated blood sugars.

Thus, in individuals with normal blood glucose, its effect on insulin is blunted. Insulin in turn directly causes the shift of glucose into the body cells reducing blood glucose.

When glucagon production is inhibited, all these mechanisms are inhibited resulting in a reduction in plasma glucose.

Liraglutide (Victoza and Saxenda) also inhibits gastric emptying. This effect is important as it reduces the glucose load being poured into the blood rapidly.

GLP-1 analogs, including liraglutide, cause early satiety. Patients may complain of fullness all the time and not feeling like eating. Liraglutide also inhibits beta-cell apoptosis and preserves pancreatic function.

Do You Know: GLP-1 analogs were first isolated from the venom of GILA MONSTER!

Liraglutide has direct and indirect effects on appetite. The endogenous GLP-1 is secreted by the L-cells of the intestine.

In the brain, it directly suppresses appetite and stimulates the nausea center in the area postrema of the hypothalamus.

The CNS appetite and vomiting center are also activated as a result of the stretch of the stomach.

When food enters the stomach, it is stretched and the afferent neuronal receptors are activated that excite the receptors in the brain’s satiety center. Thus, early satiety and nausea are the early side effects (or effects) of the drug.

Indirectly, it delays gastric emptying into the intestine. Food remains in the stomach for a longer time than usual. This may cause weight loss via three mechanisms:

Because of its weight-losing effects, it is also available in combination with Insulin Degludec by the name of Xultophy. The combination has better efficacy and is weight neutral.

Liraglutide is an incretin mimetic drug that causes the release of insulin in a glucose-dependent manner. It also inhibits the release of glucagon and suppresses the appetite center. 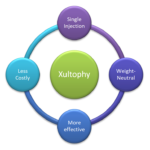