The specific medication and treatment duration will determine the effect of SSRIs on weight. Short-term treatment for two to three months with SSRIs usually causes little or no weight change. However, short-term therapy is not recommended for most patients.

Short-term antidepressant use is not associated with significant weight gain

Weight gain may occur if SSRIs are used for prolonged periods. It is unclear if this is a side effect of the antidepressant medicine or a result of recovery from depression resulting in the reversal of weight loss associated with depression.

Evidence suggests that fluoxetine (Prozac) is the most effective antidepressant for undesired weight gain, while paroxetine (Seroxat) might be the most problematic. These weight effects were reported in studies that lasted between 6 and 30 months.

Paroxetine (Seroxat) causes the most weight gain among the SSRIs

Effect of Fluoxetine (Prozac) on weight:

Effect of Citalopram on Weight:

How Effective is Topamax (Topiramate) for Weight Loss

Vortioxetine is available by the brand names of Brintellix and Trintellix. It is a serotonin modulator and is used in patients with refractory depression.

In one trial, vortioxetine was compared with sertraline in patients with depression and comorbid diabetes mellitus. Vortioxetine significantly improved all the metabolic parameters including improvement in the glycated hemoglobin and change in weight.

Vilazodone is another serotonin modulator that is available by the brand name Viibryd. It is a novel antidepressant and data is limited. However, vilazodone when compared to sertraline resulted in weight loss and had significantly fewer sexual side effects [Ref].

Bupropion monotherapy, in one 8-weeks trial, resulted in a weight loss of greater than 5 lb (2.27 kgs) in 14% and 19% in patients treated with Bupropion SR 300 mg and 400 mg per day compared to 6% in the placebo-treated patients.

Major depressive disorder has been the subject of many studies. It is unclear whether weight changes caused by SSRIs are different for different demographic profiles, such as age and sex.

A review found that weight gain during treatment with SSRIs may be due to remission of major depression, improved appetite, increased carbohydrate craving, and changes in serotonin 2C receptor activity [Ref]. Conversely, weight loss during acute SSRI treatment may be related to poor appetite at the beginning of treatment.

Among the antidepressants, paroxetine causes the greatest weight gain while bupropion is associated with significant weight loss. Lastly, the novel serotonin modulators are effective in the treatment of depression and have fewer side effects especially those related to body weight and sexual side effects. 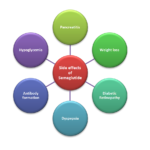