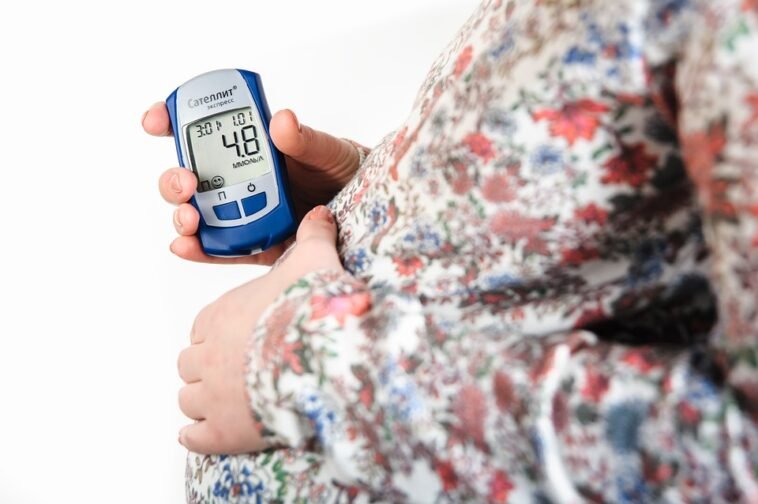 Gestational Diabetes or GDM is diabetes developing during pregnancy. Women with Type 1 or Type 2 Diabetes Mellitus who become pregnant are not labeled as having GDM. GDM or Gestational diabetes mellitus, as the name suggests, is a new onset of diabetes during gestation (pregnancy).

Gestational Diabetes is a condition that is associated with severe fetal and maternal complications. Hence, early recognition and treatment are very important.

Maternal complications of GDM include:

It also increases the risk of future operative complications [Ref].

What are the two different types of Gestational Diabetes Mellitus?

GDM is classified as A1GDM or A2GDM based on whether the pregnant female requires medical treatment or not.

Females who achieve their target blood glucose levels only with diet and lifestyle interventions are said to have A1GDM. Those females who require medical treatment in the form of drugs or insulin are labeled as A2GDM.

The symptoms of diabetes during pregnancy may be missed especially during the early stages when the blood sugars are slightly elevated.

Universal Screening for GDM is recommended: All pregnant females should be screened for GDM

Screening is generally recommended at 24 to 48 weeks of gestation

Who is at risk of developing GDM (gestational diabetes)?

Screening for GDM is now recommended for all pregnant females. However, it is important to know the risk factors for developing gestational diabetes mellitus.

Previously, the ADA recommended screening for GDM only in the following situations:

All pregnant females who are overweight or obese, and have one of the following risk factors were candidates for screening for GDM:

There are different guidelines that differ in their cut-off values for labeling a pregnant female as having GDM. No criteria have been validated in clinical trials.

GDM can be diagnosed using one-step or two-step glucose-tolerance tests. The summary and cut-off values are presented here:

Ones step ADA criteria for the Diagnosis of GDM (Gestational diabetes mellitus):

Females are labeled as GDM if more than one of the following blood sugar readings are elevated at 24 to 28 weeks of gestation. Patients are given 75 gms of anhydrous glucose in 200 to 300 ml of water.

The ACOG two-step approach for the diagnosis of GDM:

The American College of Obstetrics and Gynecologists’ two-step approach is used to diagnose GDM regardless of the timings of the day.

Females are given 50 gms of glucose and blood or plasma sugars are measured at one hour:

In STEP 2 of the ACOG Criteria, females are given 100 gms of oral glucose after an overnight fast of at least 8 hours. If two or more values are in the following ranges, the person is labeled GDM.

Females who have a positive GTT early in pregnancy are labeled as having T2DM. Those with a negative OGTT are screened again at 24 to 28 weeks of gestation.

If the test is negative at 24 to 28 weeks, the diagnosis of GDM is ruled out. If positive, females are labeled to have GDM.

The WHO criteria for the diagnosis of GDM has been last revised in 2013. Pregnant females are labeled as GDM patients if they have any of the following readings:

The Canadian Guidelines recommend two approaches. A two-step approach in which females are given 50 gm of oral glucose in the first step.

If any of the following readings are abnormal, the 50 gm OGTT is followed by a 75 gms oral glucose tolerance test. One or more abnormal readings are diagnostic of Gestational Diabetes Mellitus.

IADPSG criteria for the diagnosis of GDM:

The IADPSG criteria for the diagnosis of GDM is the same as the ADA.

Females are labeled as GDM if more than one of the following blood sugar readings are elevated at 24 to 28 weeks of gestation. Patients are given 75 gms of anhydrous glucose in 200 to 300 ml of water.

NICE GDM criteria were last revised in 2015. Pregnant females are labeled as GDM if they have any of the following blood glucose readings:

Gestational diabetes diagnosis is important to prevent fetal and maternal complications. Since females may be asymptomatic, screening for gestational diabetes is mandatory for all pregnant females. Screening should be done at the first antenatal visit and 24 to 28 weeks of gestation.