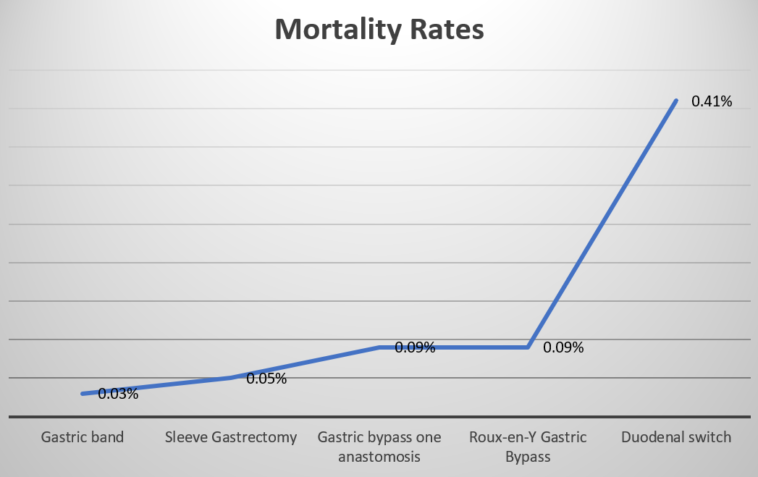 The ratio of deaths associated with various weight loss surgeries

These are common questions that we’ll try to answer here.

Morbid obesity is a metabolic disorder that is currently rising at an alarming rate. It has multiple systemic complications ranging from simple GERD to life-threatening malignancies.

That is why many clinical trials are underway for the proper treatment and prevention of obesity.

Currently, among the different medical and surgical interventions, the most tremendous weight loss has been associated with weight loss surgeries.

However, compared to medical treatments like Wegovy, Saxenda, Contrave, Qsymia, and Xenical, weight loss surgeries are associated with more complications.

This is the reason why one should choose the safest form of weight loss surgery before embarking on any surgical intervention.

The safety profile of each bariatric surgical procedure differs.

Which Weight Loss Surgery is the Safest in terms of Mortality rates?

On the other hand, the safest weight loss surgery is the one that is associated with the least number of deaths and long-term disability or morbidity.

Complications of Bariatric Surgery & How to Manage them

As seen in the table above, the risk of a person dying from weight loss surgery is very small. The gastric band is the safest followed by Gastric Sleeve, Gastric Bypass, and Duodenal switch.

Reasons not to have Bariatric Surgery

Which Weight Loss Surgery is the Safest and Least Invasive?

Surgical options are categorized here from the least invasive to the most invasive weight loss surgery.

The safest weight loss surgery is based on the degree of manipulation of the gut and the natural anatomy.

This is minimally invasive because it does not involve any kind of resection and is done through an endoscope. It is rather not a surgery. Intragastric balloons are currently of three major types. Two require the placement of balloons via an endoscope while one type is swallowed by the patient.

So, intragastric balloons are the safest of all, and the least invasive, but has their own stomach-related side effects.

Gastric Sleeve Vs Balloon for Weight Loss and Diabetes

Requires minimal dissection and one securing of the band with the stomach wall. It is probably the second least invasive surgery. It does not require any surgical dissections or resection of any part of the stomach.

It involves the resection of the stomach only. Not much dissection is required in the rest of the gut. It does not cause significant malabsorption but has gastrointestinal side effects.

Gastric Sleeve Vs Gastric Bypass Surgery: Which is Safer & Effective?

This is a more extensive procedure because it involves the resection of the stomach wall. Along with it requires resection and anastomosis of the small gut. This puts the patient at risk of developing anastomotic leaks and other complications.

This is an extensive procedure because it requires resection and anastomosis at multiple levels. Thus there is a risk of complications arising from the anastomosis as well as the risk of obstruction because adhesive band formation increases at a later stage.

This is the most invasive and extensive procedure of all bariatric surgeries currently in practice. Like a duodenal switch, it requires multiple anastomoses but its complication rates are high.

Even some patients had to undergo a reversal of this procedure. which itself is a very high-risk procedure.

The various complications associated with each of the above procedures are discussed in the next article: Complications of bariatric surgery. 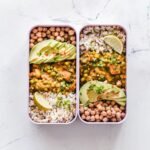