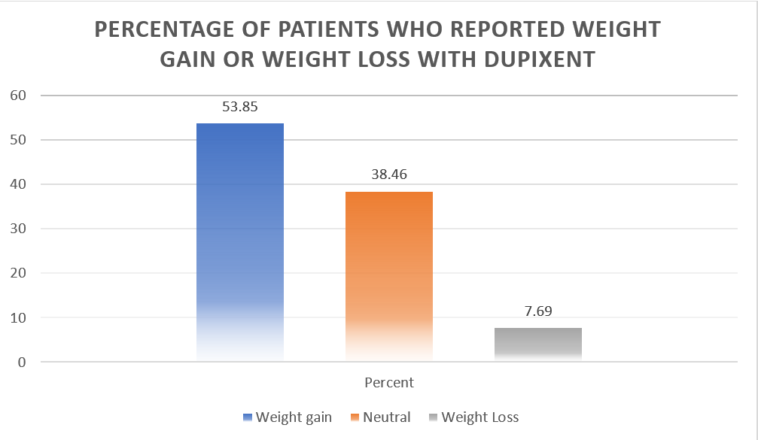 Dupixent-associated Weight Gain or Weight Loss has not been studied. However, because the drug is new in the market and more side effects are emerging day by day, it is possible that Dupixent might have some effects on your body’s fats, muscle mass, and resultant weight gain.

Because weight gain or weight loss has not been mentioned in the manufacturer’s list of “Dupixent Side effects“, we collected data from Dupixent users who have mentioned “weight gain”, “weight loss”, or “no change in body weight” while using Dupixent.

A summary of the patient’s data is presented here:

A total of 26 patients reported weight gain, weight loss, or no change in weight when they were on Dupixent injections.

All patients reported improvement in the symptoms related to their primary disease except for two patients (7.7%).

Eye redness, swelling, and eye-related side effects were among the most common side effects reported by the patients.

4 patients noticed that they had localized weight gain at the site of the injection, primarily in the stomach and the thighs.

2 patients who had no response to treatment and gained weight had to discontinue the treatment.

Patients who received Dupixent for asthma and nasal polyps lost weight compared to those who were treated for atopic dermatitis.

50% of the asthma patients lost weight while 66% of the patients who were treated for nasal polyps lost weight.

Patients in asthma and nasal polyps treated groups related their weight loss to improvement in breathing and tolerating exercise and brisk walking.

Another case series of 12 patients who were on Dupixent injections reported significant weight gain compared to those who were on methotrexate [Ref].

The average weight gain reported by patients in our case series was 13.37 pounds ranging from a minimum of 6.6 lbs to a maximum of 20 lbs.

Why patients may gain weight or lose weight with Dupixent?

The cause of weight gain with Dupixent injection is not yet clear but this has something to do with the shift in cytokines. IL-17 overexpression or underexpression has been linked with obesity and adiposity in clinical trials [Ref].

However, weight gain can also be simply a result of the reduced basal metabolic rate and reduced caloric requirement. As a patient’s skin starts healing, less energy is required by the body to fight infections and eczema.

In simple words, your body is no more fighting your skin!

Another plausible mechanism, as stated by patients who were treated for nasal polyps, is that the food starts to taste much better than before.

On the other hand, people with nasal polyps and asthma start breathing better. Hence, their exercise capacity improves and this could lead to the loss of extra fats. Thus, it’s the balance between eating more vs exercising more.

In our patients series, a greater percentage of patients who got treated for nasal polyps and asthma had weight loss rather than weight gain.

Dupixent weight gain or weight loss needs to be studied more in detail. It is too early to blame Dupixent for the gain in weight but since post-marketing reports of weight-related side effects are being increasingly reported, this side effect needs to be monitored.