Dupixent is a biological medicine that targets Interleukin 4 Receptor Alpha (IL-4Rα). It inhibits the processes that are executed by IL-4 and IL-13 since both these interleukins bind to IL4Rα.

It is used to treat the following conditions:

It has been associated with paradoxical facial redness and eye problems, the cause of which is not very clear.

However, there are some minor differences between the two.

Dupixent prefilled syringes can be used by children and adults while the prefilled pen is not recommended for use in younger children aged 12 years or younger.

Dupixent prefilled pen is kept at 90 degrees when injecting it. A Dupixent syringe is administered at 45 degrees.

The needle is visible in the syringe when injecting Dupixent while in the pre-filled pen device, the needle is covered by a needle cover.

People who have needle phobia should choose Dupixent pens rather than Dupixent syringes.

When injecting Dupliumab via Dupixent pen, you won’t see the needle going in. Once the pen is pushed against the skin, the needle cover goes up and the needle enters the skin.

Which is painful: Dupixent Pen Vs Syringe?

Different patients have different reviews. Most patients who are scared of needles don’t like prefilled syringes. For some patients, it was not the prick that hurt but the medicine.

If you are not scared of the needle and it’s the medicine that hurts when it is being injected, then the syringe is probably the best option.

Secondly, when using the Dupixent syringe, you can also control the angle at which to inject. For very skinny people, it may be best to inject at an angle of 45 degrees.

You can do that with the syringe but not when using the Dupixent prefilled pen.

What is the size (length, and gauge) of the needles of Dupixent Pen Vs Syringes?

The size of prefilled syringe needles are as follows:

The needle of prefilled Dupixent pen is hidden. One does not see it going into the skin and then coming back but can feel it.

Usually, pen devices have smaller needles but there may be very minimal difference between the two.

Which is costly: Dupixent Pen Vs Syringe?

Cost is a major issue with Dupixent unless you are getting it via your insurance coverage. Most people get injections or prefilled pens via Copay services or insurance.

Secondly, prices vary in different states. In some states, the prices of all the prefilled pen devices and prefilled syringes are the same.

Each prefilled pen and syringe costs: 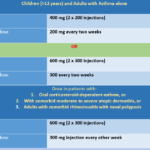