Diabesity is the co-occurrence of diabetes and obesity. Most of the new treatments are aiming to reduce the person’s body weight in addition to controlling diabetes. Controlling weight in obese diabetic patients might reverse diabetes and prediabetes.

However, as therapies emerge and new drugs are invented, the pandemic of diabesity (Diabetes and Obesity) is shifting towards developing countries. This is because of the cost involved with these new medications.

Among these six groups of medicines, only the SGLT-2 inhibitors are associated with some degree of weight loss. metformin and DPP IV inhibitors are considered weight-neutral, while the rest of the diabetes medicines cause weight gain.

The majority of the patients are on either Insulin, Sulfonylureas, or metformin. Usually, metformin is given in combination with insulin and sulfonylureas. GLP-1 class of medicines that cause marked weight loss and are the only approved diabetes medicines that have been approved for weight loss in diabetics and non-diabetics are rarely used in developing countries. A minority of the affluent class is on GLP-1 analogs.

Here is a cost comparison of oral diabetes medicines: 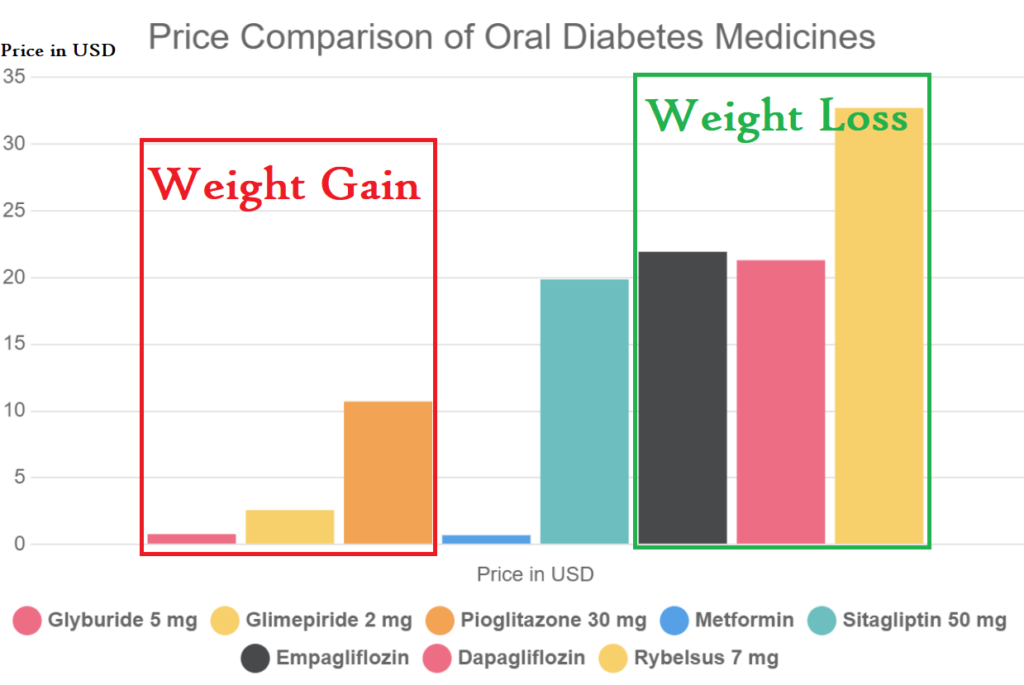 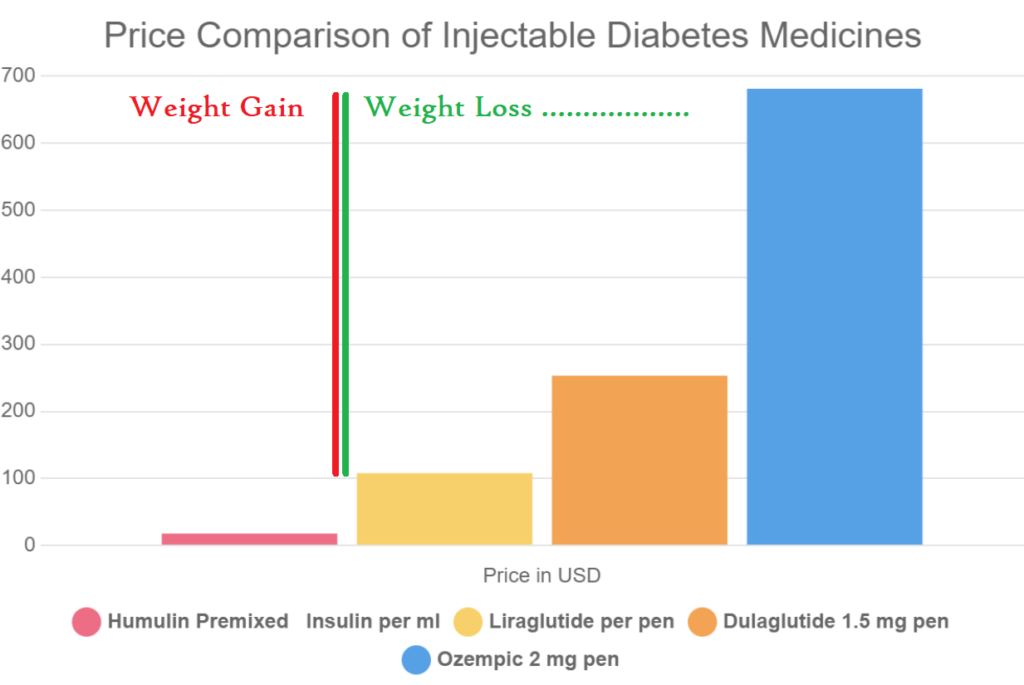 The above charts compare the prices of oral and injectable diabetes medications. It is obvious that medicines associated with weight loss are too costly compared to those causing weight gain. This difference in the prices can shift the diabesity pandemic from western countries to developing countries, adding more burden to the already stressed populations.

Diabetes Medicines that cause Weight Gain:

A low-calorie diet and exercise are good for weight loss too. However, diabetes medicines may sometimes cause weight gain. It is important to choose the right medicine for an obese diabetic patient so as the vicious cycle of weight gain, immobility, and uncontrolled diabetes does not begin.

Diabetes medicines that cause weight gain are listed here: 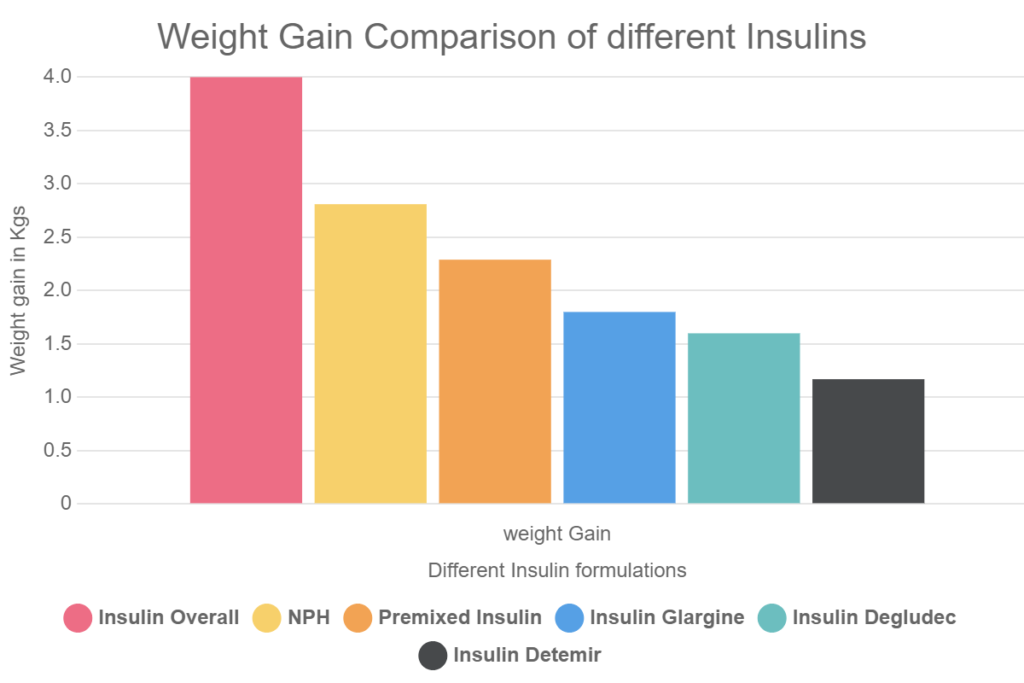 Summary of Comparison of oral Diabetes medicines that cause weight gain: 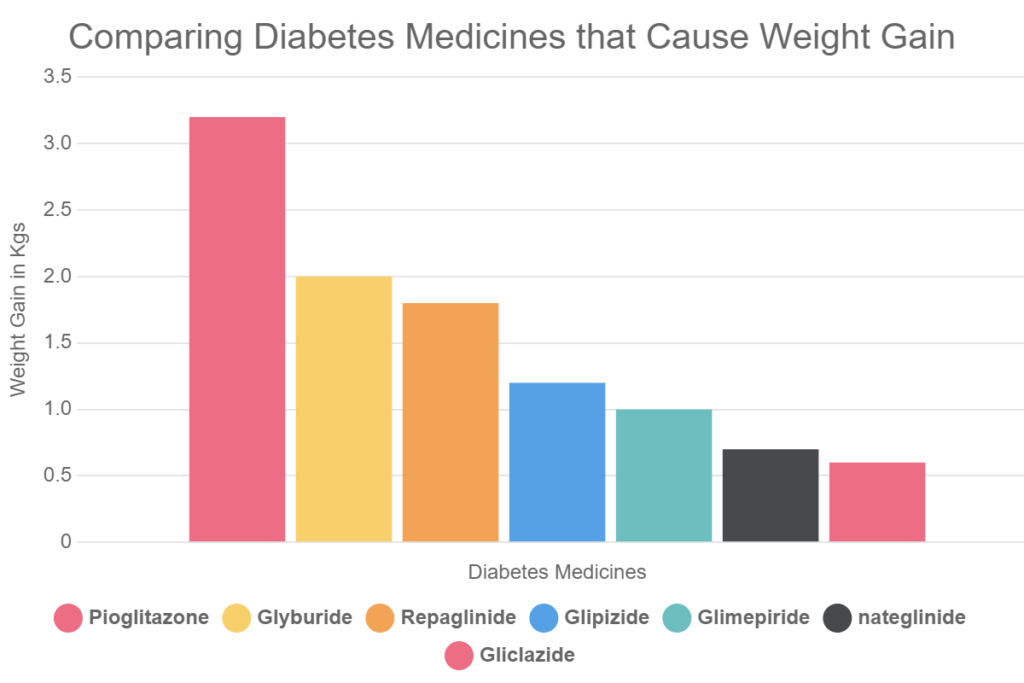 Insulin, Thiazolidinediones, Meglitinides, and Sulfonylureas are diabetes medicines that cause weight gain. Some of these drugs are associated with more weight gain than others. However, the degree of weight gain depends on the concomitant medications and the intensity of the diabetic regimen. Individuals on intensified regimens and those with frequent hypoglycemia are more likely to gain weight compared to those who are on a less intensified regimen.

Most novel diabetes medicines are weight neutral. SGLT2 Inhibitors such as Dapagliflozin, Ertugliflozin, and Empagliflozin, as well as the GLP-1 analogs (Semaglutide, Liraglutide, Dulaglutide, and exenatide), cause weight loss.