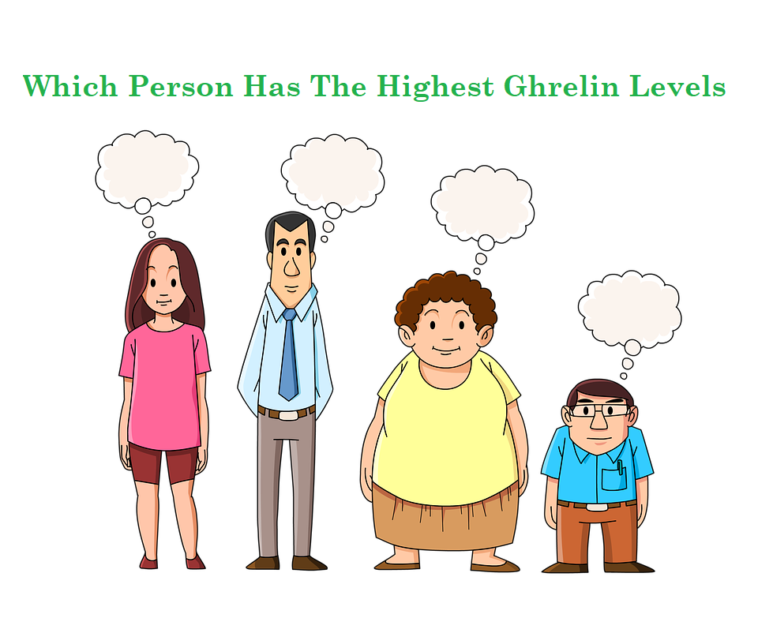 Ghrelin is a peptide hormone that is produced mainly by the stomach in the fasting state. It is mostly excreted during periods of starvation and anorexia when a person is in a negative energy balance.

Ghrelin hormone levels drop under fed states, hyperglycemia, and are comparatively low in obese individuals. There is a lot of evidence that ghrelin plays an important role in the neurohormonal regulation of food intake, and energy homeostasis.

Ghrelin also plays a role in growth and memory

Ghrelin, a 28-amino acid peptide, is the natural ligand of the growth hormone secretagogue regulator (GHS-R). It is a member of the motilin family peptides based on its structure.

Ghrelin can be administered intramuscularly or centrally to stimulate the secretion of growth hormone and increase food intake. It also causes weight gain.

Where is the Ghrelin hormone distributed in the human body?

Ghrelin is found in the stomach fundus, where it is most abundant. It is produced in oxyntic cells by distinct endocrine cells called P/D1 cells.

Ghrelin is primarily present in stomach

Ghrelin (growth hormone secretagogue receiver [GHS-R]), is a member of a G protein-coupled receptive (GPCR) subfamily, which also includes neurotensin, motilin, and neuromedin U. GHS-R1a, and GHS-R1b are two forms of this receptor. They both result from alternative mRNA sequencing from one gene.

Ghrelin receptors are expressed in the Central and Peripheral Nervous system

GHS-R1a is co-expressed in hypothalamic nuclei with neuropeptides Y (NPY), and agouti-related peptides (AgRP), which regulate food consumption and satiation [Ref]. GHS-R1a can be found in peripheral tissues such as the anterior pituitary and islet cells of the pancreas, thyroid, adrenal, and glands.

GHS-R1a can also be found on autonomic and enteric neurons, but not smooth muscle. GHS-R1b, a shorter form of the receptor, is distributed more widely than GHS-1a. It does not interact with the G protein complex and so its biological actions are unknown.

How is Ghrelin secreted?

Ghrelin levels in blood rise during fasting, and spikes occur just before meals. Ghrelin secretion seems to be a cephalic response. It may be under sympathetic and vagal nervous system control. Ghrelin can be entrained, which may help in meal preparation.

After eating, Ghrelin levels drop. The suppressive effects of food seem to be nutrient-specific. Carbohydrates have the most effect, followed closely by protein and lipids. Postprandial suppression is not related to intraluminal nutrient exposure or meal effects on gastric distention but occurs via non-vagal neural signals.

Ghrelin expression was detected in some types of cancers, including most gastric carcinoids as well as some pancreatic and intestinal neuroendocrine tumors. Ghrelin has been shown to promote growth in vitro. It is also suggested that ghrelin might be a potentiator of cancer growth.

Low baseline levels of ghrelin have been linked to gastric cancers, esophagogastric Junction, and other cancers. This could be due to the fact that serum ghrelin levels decline in chronic inflammation and atrophy.

Fasting plasma levels of ghrelin are between 550 and 650 pg/mL in lean people. In obesity, circulating ghrelin levels fall to 200 to 350 pg/mL in states of positive energy balance and between the two. A decrease in plasma ghrelin has been linked to gastritis. This could be caused by Helicobacter Pylori infection. It is possible that serum ghrelin may be a useful indicator of gastric atrophy.

serum Ghrelin levels may be indicative of Gastric atrophy

Numerous reports have shown that the gut microbiome influences ghrelin production by releasing bacterial metabolites, including lipopolysaccharides and hydrogen sulfide. These relationships are complicated and poorly understood.

Ghrelin can be intravenously administered to stimulate growth hormone secretion. It causes mild elevations in cortisol (ACTH), cortisol, and prolactin. Ghrelin and growth hormone-releasing hormone (GHRH), together, can increase growth hormone levels. It is possible that the effects of ghrelin on growth hormone release are mediated by neural afferent vagal pathways. This may include stimulation of GHRH.

Ghrelin can stimulate appetite and induce a positive energy balance, which can result in weight gain. Ghrelin plays a role in mealtime hunger and meal initiation. Ghrelin was the first hormone that can increase feeding rate when administered peripherally.

Ghrelin is the only known orexigenic hormone transmitter that stimulates feeding when administered peripherally. Ghrelin is believed to signal the body to initiate feeding. Ghrelin is a hormone that increases the quantity but not the size of meals. Ghrelin is responsible for regulating short-term eating habits and regulating body weight over time.

Ghrelin levels that are elevated during fasting are associated with activation in reward centers in the hypothalamus and amygdala and prefrontal cortex. This indicates that food intake is more complex than hunger and satiety.

Normal postprandial suppression is impaired in obese subjects. Ghrelin can also induce adiposity, which is maintained as long as ghrelin levels remain elevated. It counteracts energy storage decreases and prevents starvation. Ghrelin was the first hormone that signaled starvation and is believed to play a role in long-term regulation.

Ghrelin is a neurotransmitter that activates AgRP-producing and NPY neurons in the hypothalamus’ arcuate nucleus. This area of the brain is important in the regulation of food intake.

The ghrelin hormone-secretagogue receptor GHS-1a is also expressed in the pituitary, hypothalamus, and substantia nigra. Ghrelin is known to have a profound effect on the brain’s higher functions such as memory, sleep, and reward-seeking behavior.

The effect of Ghrelin on Gastric motility:

Ghrelin, which is similar to motilin stimulates gastric contractions and increases stomach emptying. It also increases phase III-like contractile activities of the stomach, duodenum, and duodenum. These effects are caused by the vagal cholinergic pathway.

Ghrelin was shown to depolarize Cajal interstitial cells, which regulate the gastrointestinal pacemaker function in murine models. Ghrelin’s prokinetic effects are stronger than those of other gastrointestinal proteins, such as Cholecystokinin which acts as hunger signals.

Evidence suggests that ghrelin might have anti-inflammatory properties. One study found that ghrelin receptors on human T cells, and monocytes, inhibited proinflammatory and anorectic chemicals, such as interleukin-1 beta and tumor necrosis factors-alpha [Ref].

Ghrelin could also be thought to affect bone metabolism. Growth hormone has been shown to increase bone formation. GHS-R1a has been identified in osteoblasts, which indicates that ghrelin can stimulate osteoblast cell proliferation as well as differentiation.

Ghrelin has been shown to increase bone mineral density in normal and growth hormone-deficient animals. Serum ghrelin levels appear to be independent predictors of BMD in healthy adolescent girls as well as those suffering from anorexia, which is a disorder that causes higher than normal ghrelin secretion.

Axis of growth hormone: Short stature has been linked to GHS-R defects. The GHS-R locus seems to be a source of genetic variation for height.

The function of the Islet: GHS-R1a expression is predominant in pancreatic islets. This indicates that insulin and glucagon secretion is inhibited indirectly by ghrelin. Ghrelin, consistent with its receptor expression inhibits glucose-stimulated insulin production.

Ghrelin’s short half-life makes it difficult to use therapeutically. However, there are many longer-acting alternatives. Ghrelin is a mimetic drug.

Macimorelin is one of the longer-acting alternative drugs that has been approved by the US Food and Drug Administration (FDA) for diagnosing growth hormone deficiency [Ref]. It is safe, effective, and has comparable efficacy as the Arginine GHRH test.

Ghrelin is a growth hormone mimetic

Ghrelin is an important signal that stimulates food intake, promotes positive energy balance and weight gain. Therefore, it is reasonable that ghrelin antagonists will block these orexigenic signals and may prove to be effective anti-obesity treatments.

Pharmaceutical companies are focusing their efforts on developing ghrelin antagonists. It will be particularly interesting to see if interventions that lower the circulating levels of ghrelin or ghrelin receptor analogs can effectively treat hyperphagia/obesity of Prader-Willi Syndrome.

Ghrelin agonists could also be used to treat anorexia. It may have a role in treating cachexia based on its effects on food intake and ability to inhibit the production of anorectic proinflammatory chemicals cytokines. For the treatment of unexpected weight loss in pets, capromorelin, an oral ghrelin-agonist, has been approved by veterinary authorities.

Ghrelin mimetics could be used to treat frailty among older adults. The anti-aging effects of caloric restriction may be due to the increased circulating levels of ghrelin associated with fasting. It is possible that ghrelin-mimetics could have other effects than reducing frailty.

Ghrelin was suggested to prevent neurodegenerative conditions like Alzheimer’s disease, due to its ability to stop beta-amyloid accumulation in animal models.

Ghrelin mimetics could be used to treat frailty among older adults

Ghrelin is most abundant in the stomach. It makes up over 90% of the body’s total. It is found most often in the stomach fundus, where it is made in distinct endocrine cells called P/D1 cells.

Ghrelin (a 28-amino acid peptide) is the natural ligand of the growth hormone secretagogue regulator (GHS-R). GHS-R belongs to a subfamily of G protein-coupled receptors (GPCR), which also includes neurotensin, motilin, and neuromedin.

Ghrelin levels in the blood rise during fasting and then surge just before meals. After eating, its levels drop. Food appears to have a specific effect on its plasma levels. The most suppressive effects are seen in carbohydrates, followed by protein, and lipids.

Ghrelin can stimulate appetite and induce a positive energy balance which may lead to weight gain. It plays a key role in mealtime hunger management and meal initiation. There is evidence that it also plays an important role in the neurohormonal regulation of energy and food intake.