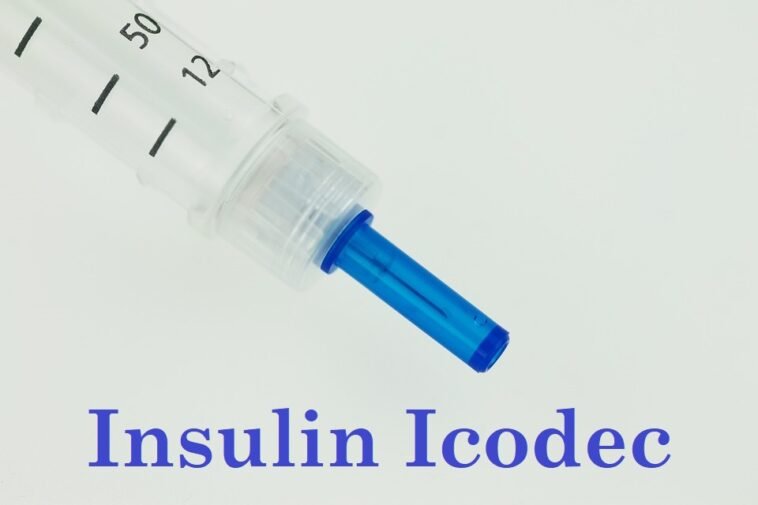 It is an insulin analog that has a half-life of about one week and the time to reach the maximum concentration after it is administered is about 16 hours.

See half-lives of various insulin analogs that are used to provide basal insulin cover throughout the day:

Icodec Insulin is currently in clinical trials and not yet FDA-approved. It is being manufactured by Novo Nordisk Pharmaceuticals and is undergoing clinical trials in both type 1 and type 2 Diabetes patients.

Once weekly insulin in combination with once weekly Semaglutide (Ozempic) or Tirzepatide (Mounjaro) may provide stable glucose control in individuals who are non-compliant with daily medications.

In addition, it can be combined with SGLT-2 Inhibitors, Metformin, Sulfonylureas, or short-acting/ long-acting insulins to provide a basal insulin cover.

Importantly, children with type 1 diabetes who frequently miss their doses can benefit from this once-weekly insulin. Providing a basal cover of insulin may reduce the chances of frequent episodes of ketoacidosis.

Furthermore, it may be a suitable option for patients who have a needle phobia. Once-weekly insulin can minimize the number of injections by 7 times compared to other basal once-daily insulins.

In a recently published article in NEJM titled ” Once-weekly Insulin for Type 2 Diabetes without previous treatment”, the authors have compared Insulin Icodec with Insulin Glargine U-100.

The study proved the efficacy and safety of insulin Icodec. It had a comparable efficacy as Insulin Glargine. Greater than two-thirds of the patients achieved the target glycated hemoglobin in the trial. Likewise, the fasting plasma glucose control was similar in both groups.

It was also noted that Icodec had a favorable side effect profile compared to insulin glargine as the number of hypoglycemic episodes was few compared to Insulin Icodec.

The glucose-lowering effects of Icodec after 26 weeks were better than Insulin Glargine. This was with the added benefits of fewer side effects, especially hypoglycemia.

In addition, once-weekly insulin is an easy option for people who travel most of the time, have a busy schedule, hectic routine, and have poor medication compliance.

HbA1C of 7% or less is the target HbA1C for most diabetic patients as per the ADA recommendations.

The Europeans and other Endocrine societies recommend a target HbA1C of 6.5% or less. However, there is a general consensus that older diabetic patients and patients with other comorbid conditions such as IHD, stroke, kidney, or liver disease can have an HbA1C of around 7%.

When compared with Glargine, a similar percentage of patients in the Icodec achieved the target A1C.

The effect of Icodec Insulin and Insulin Glargine on body weight:

All insulins are associated with an increase in body weight. Insulin detemir causes the least weight gain compared to other insulins.

In previous studies, Insulin glargine was noted to cause a similar amount of weight gain.