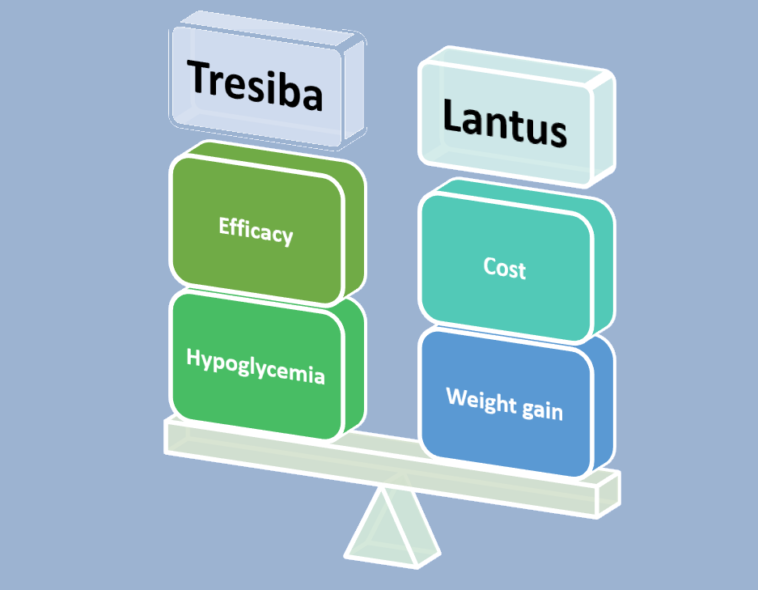 Tresiba Vs Lantus (Degludec vs Glargine): Which Insulin is better in controlling diabetes and has the least side effects.

When we talk about the side effects of insulin, we assume hypoglycemia and weight gain. Although, other side effects can also occur with both insulins.

Furthermore, basal insulin like Degludec and Glargine is given in combination with other diabetes medications. The efficacies and side effects of the concomitant drugs can alter the actual incidence of these effects.

What is Tresiba Vs Lantus:

People who require higher doses of insulin are usually advised U-200 to reduce the volume of injection.

Tresiba Insulin is basal insulin with a very long half-life. It can be administered once daily at any time of the day. Since the levels of Insulin Tresiba remain steady in the blood after it is administered, it is considered peak-less insulin.

Peak-less Insulins are least likely to cause hypoglycemia unlike rapid-acting and short-acting insulins.

However, Tresiba is also available in combination with a rapid-acting insulin, Insulin Aspart, by the name of Ryzodeg.

Lantus is also basal insulin with a slightly shorter half-life. It contains Insulin glargine that is available in three different concentrations, U-100 (Lantus), U-300 (Insulin Toujeo), and U-500.

Lantus insulin is also administered once daily, however, unlike Insulin Tresiba, it is usually administered at a fixed time of the day. It is also available in combination with a GLP-1 analog, Lixesenatide by the name of Injection Soliqua.

Both basal Insulins Tresiba and Lantus are equally effective in lowering blood glucose and HbA1C. Some studies consider Lantus to be more effective while others have found Tresiba more effective. However, for insulins, it is all about the dose you administer.

Most endocrinologists agree that both the basal insulins, Tresiba and Lantus, are equally effective in lowering blood glucose.

Furthermore, it has been proven in clinical trials that Tresiba might be the preferred insulin if the dose is very high.

In one clinical trial, the reduction in the glycated hemoglobin was similar in both Tresiba and Lantus groups, however, the mean fasting blood glucose was significantly better controlled with Insulin Tresiba compared to Glargine [Ref] when the dose exceeded 60 units per day.

Thus, it may be concluded, that Tresiba and Lantus are equally effective. However, patients requiring higher doses (exceeding 60 or 80 units per day) may be switched to insulin Tresiba.

Incidence of Hypoglycemia with Tresiba Vs Lantus:

Tresiba and Lantus are both considered peak-less insulins. The risk of hypoglycemia is significantly less compared to other rapid-acting and short-acting insulins.

Furthermore, the occurrence of hypoglycemia is also dependent on multiple factors especially the dose of insulin used.

In one study, the risk of hypoglycemia was comparable with both insulin Tresiba and Lantus. However, the risk of nocturnal hypoglycemia (low blood glucose at night) was significantly lower with Tresiba compared to Lantus.

Both insulins were also studied in T1DM. Although the efficacy of both Insulin Tresiba and Insulin Lantus were comparable, the risk of hypoglycemia, especially nocturnal hypoglycemia was significantly lower in patients in the Injection Tresiba group [Ref].

Weight gain is a common side effect of insulin. It is more common in patients who are receiving short and rapid-acting insulin. The weight gain effect of Tresiba vs Lantus is comparable.

In clinical trials, weight gain ranging from 1 to 3 kgs has been documented with Tresiba and Lantus. There were slight differences, however, the results were not significant.

Furthermore, the weight gain effect of insulin also depends on the dose, the frequency of hypoglycemia, diet, and exercise.

When switching from one basal insulin to another, the dose of insulin is generally reduced by 20% to reduce the risk of hypoglycemia.

However, in patients with uncontrolled blood glucose, the dose may not need to be reduced by 20%.

For example, a person is using 60 units of Injection Tresiba daily, the dose is reduced by 20%.

If the total dose of Injection Tresiba is more than 80 units per day, the dose of Lantus should be divided into two doses and administered twice daily.

For example, a person is on 100 units of Injection Tresiba, the dose is first reduced by 20%.

The same rule applies if Lantus is switched to Tresiba. A person using 60 units of Lantus Insulin will inject 48 units of Tresiba daily.