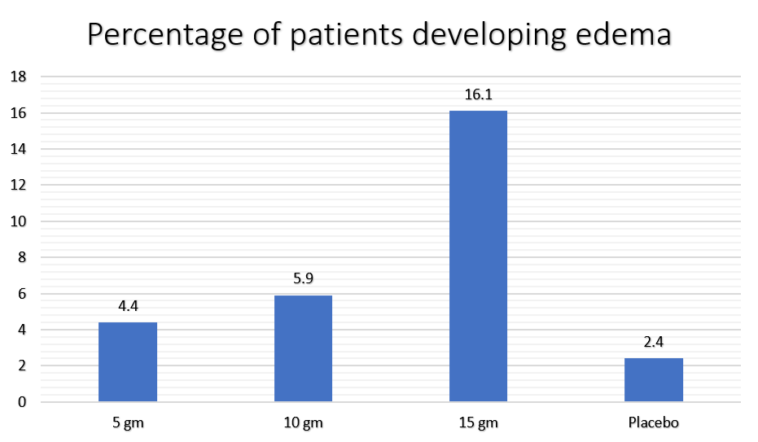 percentage of patients developing edema at different doses of Lokelma

Lokelma Vs Kayexalate is a comparison of the two potassium binding resins. Lokelma is the brand name of Sodium Zirconium Cyclosilicate marketed by AstraZeneca.

Even now, Kayexalate is the most commonly used potassium-binding resin because it is easily available and very cheap.

Lokelma has been recently approved by the FDA. It got its approval as a potassium-binding resin in 2018.

Although Kayexalate is widely available and very cheap compared to Lokelma and Veltassa (Patiromer), it is non-specific and associated with serious side effects.

Here, we compare Lokelma vs Kayexalate in terms of their pharmacological characteristics, safety, and efficacy.

Lokelma is an inorganic insoluble, tasteless, and odorless powder that is mixed with about 45 ml of fluid and administered orally.

It binds potassium ions in exchange for sodium and hydrogen ions and prevents potassium from getting absorbed into systemic circulation.

On the other hand, Kayexalate powder is a non-specific resin that binds calcium and magnesium in addition to potassium. Thus preventing the absorption of Potassium, Calcium, and Magnesium ions.

It primarily acts in the colon and can be administered via oral as well as per rectal routes. It can also be given via a nasogastric tube (NG tube).

Lokelma Vs Kayexalate: Which Drug more rapidly removes Potassium from the body?

Lokelma has an onset of action of one hour. In clinical trials, the potassium-lowering effects of Lokelma were observed after one hour of its administration.

After 48 to 72 hours, it normalized potassium levels in about 99% of the patients.

On the other hand, the potassium-lowering effects of Kayexalate powder are very unpredictable. It may take hours to days for the potassium to drop to normal values.

Lokelma Vs Kayexalate: Summary of comparisons:

How is Lokelma Vs Kayexalate prepared and Administered?

Lokelma is available as a tasteless and odorless powder. It is mixed with about 45 ml of plain water to make a suspension and ingested immediately after preparation.

Kayexalate powder can be mixed in water or with 30 to 45 cc of lactulose and administered orally or via a nasogastric tube. It can also be administered via the per rectal route as an enema.

Both Lokelma and Kayexalate are resins and can bind other substances like medications and chemicals. Compared to Kayexalate, Lokelma has very few drug interactions.

Lokelma impairs the absorption of only those medications that require an optimal PH in the stomach or intestines to get absorbed.

Kayexalate, on the other hand, binds non-specifically to many important medications. It impairs the absorption of medications and antacids that contains cations like calcium, magnesium, and aluminum.

Kayexalate should not be given with Sorbitol as it may cause serious intestinal necrosis.

Some of the drugs that have been tested in patients who were simultaneously taking Lokelma are given in the table below [Ref]:

Important drugs that may not be properly absorbed while the patient is simultaneously taking Kayexalate are:

The manufacturer of both Kayexalate and Loklema recommends avoiding the concomitant administration of medications.

Lokelma Vs Kayexalate: Which drug is safer?

Lokelma is a much safer alternative to Kayexalate. Lokelma does not have any known contraindications.

Kayexalate is contraindicated in patients who may be allergic to it, patients who have reduced gut motility and inflammation such as those with active inflammatory bowel disease, intestinal obstruction, and neonates with gut motility disorders.

Kayexalate has been associated with bowel ischemia, perforation, and necrosis, especially for those with underlying gastrointestinal disease or bowel ischemia, or when it is administered with sorbitol.

Lokelma has not been studied in patients with GI motility disorder and is not recommended in these patients.

The other two known side effects of Lokelma are edema and hypokalemia. Edema occurs as a result of the sodium content of Lokelma while hypokalemia is obviously the result of overtreatment.

Side effects of Kayexalate apart from intestinal necrosis are:

Lokelma Vs Kayexalate: Which drug is more effective in correcting hyperkalemia?

Lokelma is associated with a more rapid and constant reduction in serum potassium levels. The potassium-lowering effects of Lokelma can be observed within one hour of administering the drug.

On the other hand, the potassium-lowering effect of Kayexalate is very unpredictable. It may start to lower serum potassium in hours to days.

The potassium-lowering effect of Lokelma is dose-dependent. The higher the dose, the more likely will it lower the serum potassium.

In clinical trials, 84% and 99% of the patients achieved normal potassium levels in the plasma after 48 and 72 hours of Lokelma (given in a thrice daily dose).

The initial correction dose is administered three times a day while the maintenance dose is given once daily [Ref].

Lokelma is not available in most countries and is very costly compared to Kayexalate. Lokelma costs around USD 25 per 5 gm sachet.

The cost of Kayexalate is much less and depends on the country and pharmacy but usually, it costs less than 5 dollars (5 USD) per 5 gm of the drug. 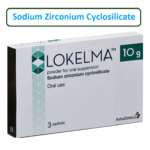 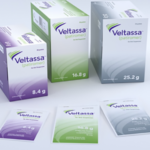