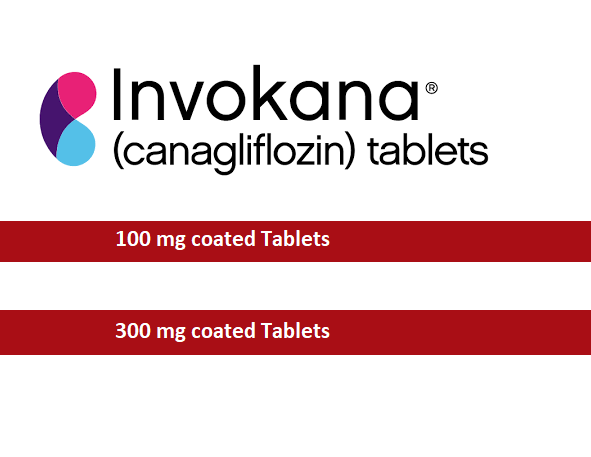 Canagliflozin (Invokana) is the most potent of all the SLGT-2 Inhibitors. It has the greatest A1C reduction compared to Farxiga (Dapagliflozin), Jardiance (Empagliflozin), and Steglatro (Ertugliflozin).

Canagliflozin is an SGLT-2 inhibitor that is a diabetic medication and helps in filtering out the extra glucose from the body by excreting it through the urine.

This drug is most effective if it is continued with a healthy diet and regular exercise.

Who can use Canagliflozin (Invokana)?

Canagliflozin can be used:

How to use Invokana?

Canagliflozin is available as a tablet which is taken once daily. It is preferred to take canagliflozin before meals.

The suggested starting dose is 100 mg/day which can be increased to 300 mg if necessary.

Mechanism of Action of Canagliflozin:

Canagliflozin is a drug used to treat high blood glucose levels. It works by inhibiting the release of sodium-glucose cotransporter-2 from the kidneys.

SGLT-2 is mainly involved in the absorption of glucose from the urine after which it is transferred back to the bloodstream.

By inhibiting SGLT-2, canagliflozin reduces glucose reabsorption in the renal tubules and decreases the renal threshold for glucose. This causes the excess glucose to be released in urine and thereby regulating its concentration in the blood

Canagliflozin is also helpful in regulating blood pressure because SGLT-2 is also responsible for the reabsorption of sodium.

As an SGLT-2 inhibitor canagliflozin decreases the reabsorption of sodium leading to a reduced sodium concentration in the blood and low blood pressure.

Pharmacokinetics and Pharmacodynamics of Invokana:

Several studies have been conducted to assess the efficacy of Invokana.

According to a study, a 100 and 300mg dosage of canagliflozin significantly reduced HbA1c and fasting blood glucose levels. It also reduced body weight and systolic blood pressure. However, the study also reported some adverse effects such as UTIs and genital infections. [Ref]

Another study assessed the efficacy of canagliflozin in participants whose blood glucose levels were inadequately controlled by metformin.

The study results showed that canagliflozin after metformin monotherapy significantly improved glycemic control and aided in weight loss. However, this study also reported incidences of genital infections among women. [Ref]

A 52 weeks study compared the efficacy of canagliflozin with sitagliptin in participants previously using metformin.

Canagliflozin in combination with other Diabetic Medications

Metformin is the most commonly prescribed medication for Type 2 diabetes. If your blood sugar remains high after taking metformin alone, you can combine it with canagliflozin.

Canagliflozin has also been investigated as a supplement to other medications such as sulfonylureas and insulin.

However, careful monitoring is required for these combination therapies, especially when combined with insulin. This is done to avoid a sudden drop in blood sugar levels.

This can also be adjusted with carbohydrate counting and adjusting the number of carbs in your daily meals.

Side effects of Canagliflozin (Invokana):

The most common side effects caused by Canagliflozin are:

Genital yeast infections and urinary tract infections are the most common side effects. Fournier’s gangrene is a life-threatening infection of the groin that is one of the emerging side effects associated with all SGLT-2 inhibitors.

In addition, volume depletion is commonly reported by patients using SGLT-2 Inhibitors, however, it can be the cause of renal failure if the person becomes dehydrated.

Invokana should not be administered to patients with: