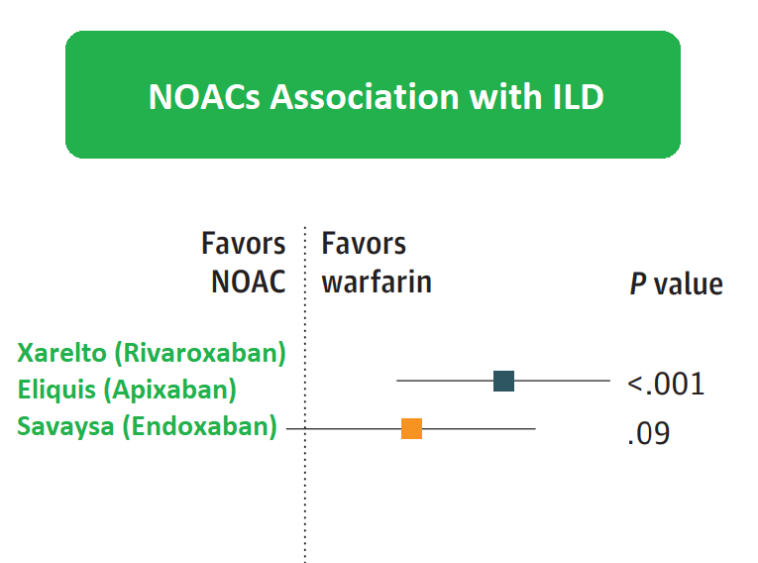 A recently published study has linked the use of oral Factor Xa Inhibitors with ILD (Interstitial lung disease).

The study was carried out in Taiwan. Data from the Taiwan National Health Research Database was taken and analyzed [Ref]

All patients with NVAF (non-valvular atrial fibrillation) who did not have a preexisting lung disease or ILD were enrolled in the study.

Patients were divided into three groups:

The baseline demographics were:

The Incidence of ILD in the Factor Xa Inhibitors group vs Warfarin and Dabigatran Group:

The incidence of ILD in the group of patients who received Factor Xa Inhibitors was significantly greater compared to warfarin (P value: <0.001).

The incidence of ILD in the Dabigatran group was statistically not significant compared to warfarin (P value: 0.09).

The risk of ILD was then analyzed individually and compared with warfarin. The HR (hazard ratio) of developing ILD was greater in the Apixaban group, followed by Endoxaban and Rivaroxaban groups. The results were not statistically significant between groups (P value: 0.75).

The use of Amiodarone was significantly associated with ILD. The risk was greater when amiodarone was combined with:

How can Factor Xa inhibitors cause ILD:

Likewise, NOACs and DOACs especially Factor Xa inhibitors (Apixaban and Rivaroxaban) are being increasingly used in the treatment of atrial fibrillation and prevention of thromboembolism.

The finding of the study cited above can not be ignored. However, because the risks of thromboembolism are much greater compared to the development of ILD, patients and physicians should not abruptly stop Factor Xa inhibitors or switch to VKA (vitamin K antagonists).

This is also because we don’t know how Factor Xa inhibitor may be associated with ILD.

Here are some of the hypotheses that can link the use of Factor Xa inhibitors with ILD:

The current study does not suggest that people should stop or switch their NOAC therapy, Apxiban, Rivaroxaban, or Endoxaban.

In addition, the current study necessitates the need for further studies to identify the causality and association of Factor Xa Inhibitors and ILD.