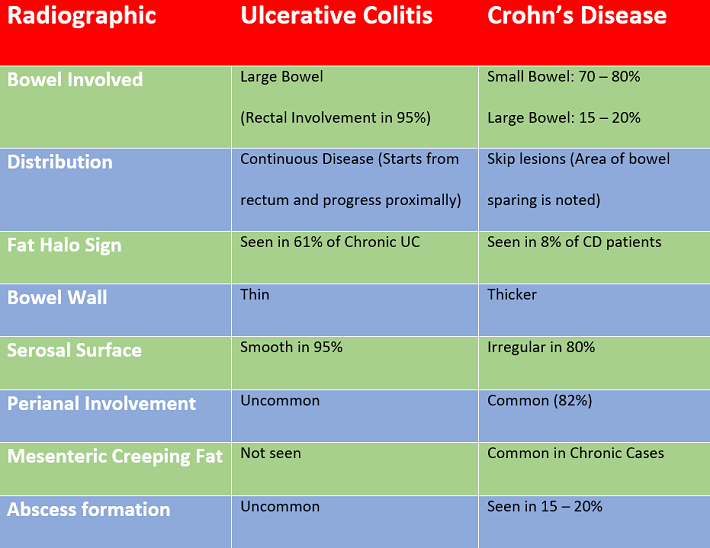 A Quiz to test your knowledge about Ulcerative Colitis vs Crohn’s Disease is presented at the end of the post. You can find answers to your questions in the post below. It is therefore best to read the post first before answering the quiz.

In addition, individuals who have had appendectomies are less likely to develop Ulcerative Colitis.

Ulcerative Colitis is more of a clinical diagnosis and confirmed by tissue biopsy. On the other hand, it is very difficult to diagnose Crohn’s disease based on its signs and symptoms.

Both Ulcerative Colitis and Crohn’s Disease are categorized as inflammatory bowel diseases. A person’s digestive system irritates often in both situations.

The immune system’s poor response to the microbiome that lives in a person’s stomach causes these inflammatory flare-ups.

The regions and ways that ulcerative colitis and Crohn’s disease affect a person’s intestines differ significantly from one another.

Site of Inflammation in Ulcerative Colitis vs Crohn’s Disease:

The colon is the only location ulcerative colitis may affect, in contrast to Crohn’s disease, which could also influence any tissue between the mouth and the anus.

In Crohn’s disease, patches of inflammatory tissue are scattered throughout the healthy intestine. However, ulcerative colitis makes the colon permanently inflamed and can even invade the linings of the intestinal tissue.

Signs and Symptoms of Ulcerative Colitis Vs. Crohn’s Disease:

Some more common manifestations of ulcerative colitis include the following:

These signs usually get worse with time. Numerous individuals who suffer from ulcerative colitis also discover that their symptoms might temporarily improve before later getting worse.

Only 10% to 30% of those with ulcerative colitis experience other symptoms, which are less prevalent [Ref].

These signs, listed below, are extraintestinal, which means that the person’s intestines remain unaffected. They consist of:

The signs and symptoms that are frequently found among patients of Crohn’s disease are listed below:

In a manner similar to ulcerative colitis, the extraintestinal signs and symptoms of Crohn’s disease include:

A stool sample may be examined by a doctor to look for mucus or blood that could indicate ulcerative colitis. Doctors can rule out other problems, such as infections or germs, by using stool samples.

The colonoscopy, which involves inserting a tiny camera-equipped thin tube into the colon to see the whole interior and collect a sample of inflammatory tissue, is the gold standard for diagnosing Ulcerative Colitis.

Rectal involvement occurs at the start of the disease. Hence, it is unusual to find a normal rectum on colonoscopy in patients with Ulcerative Colitis.

In one study about 10% of the patients diagnosed with Ulcerative Colitis had normal rectum. It was noted that these patients are usually refractory to treatment [Ref].

Endoscopes are exclusively inserted through the anus while diagnosing ulcerative colitis. The two varieties are:

The whole digestive system may become inflamed as a result of Crohn’s disease, and regions of both healthy and inflammatory tissue are frequently present.

The pathology report on the biopsied tissue can assist in making that diagnosis because Crohn’s disease may occasionally just affect the rectum and a portion of the colon.

Granulomas, which are immune cell clusters, are occasionally produced by Crohn’s disease but not by ulcerative colitis.

According to the Crohn’s and Colitis Foundation, granulomas are the consequence of your body’s effort to expel foreign matter, and the cells are discernible under a microscope.

The doctor may request that you undergo imaging tests, such as an MRI or CT scan, to get a closer look if they have evidence to assume that Crohn’s disease has impacted the small intestine.

Your doctor may do an upper endoscopy to identify the location of the inflammation of the esophagus or another portion of the upper GI tract is affected.

There are two different endoscopic procedures for Crohn’s disease:

There are subtle radiographic differences between Ulcerative Colitis and Crohn’s Disease which are presented in the table below:

On Barium studies, Ulcerative Colitis is seen as a “Lead Pipe” because of loss of intestinal haustrations while strictures may be seen in Crohn’s Disease.

The biopsy is considered the Gold Standard test to diagnose IBDs. It can differentiate between Ulcerative Colitis and Crohn’s Disease.

Here are some differences in tissue biopsy:

Crohn’s Disease, on the other hand, is a slowly progressing disease that presents a diagnostic dilemma.

The complications of Ulcerative Colitis and Crohn’s Disease are tabulated below:

Hence, peripheral arthritis may be associated with disease flare-ups compared to axial involvement or ankylosing spondylitis.

Which is Worse? Ulcerative Colitis Or Crohn’s Disease?

While both Crohn’s disease and ulcerative colitis are persistent disorders related to inflammation that impact the digestive tract, ulcerative colitis (UC) may be deemed to be “worse” due to the possibility that surgery may be necessary sooner and, in some cases, more urgently in cases of severe and extensive ulcerative colitis.

Medications and injectable steroids are unable to treat the symptoms. A potentially fatal consequence brought on by extreme inflammation and requiring emergency surgery is toxic megacolon, which can develop as a result of severe, abrupt ulcerative colitis.

The signs and symptoms include excruciating pain, abdominal distension or bloating, fever, a fast heartbeat, constipation, and dehydration.

Are You Ready to Take the Ulcerative Colitis Vs Crohn’s Disease Quiz Now?